Writer, photographer and podcaster Joan Hamilton has been covering the recovery of Mount Diablo from the 2013 Morgan Fire with monthly dispatches from the mountain. This is her final entry before she wraps up our coverage in the October-December 2015 issue of Bay Nature. Find the entire series at baynature.org/diablo.

Last year seeing anything come up through the rubble of Mount Diablo’s 2013 Morgan Fire was exciting. Here are some chamise sprouts in early April 2014: . . . and some whispering bells, which had scarcely been seen on the mountain since the last big fire, in 1977. Researchers, including Nomad Ecology’s Heath Bartosh (left) and Brian Peterson, studied what showed up that spring. Plants were sparse in the chaparral … … but dense in the grasslands. 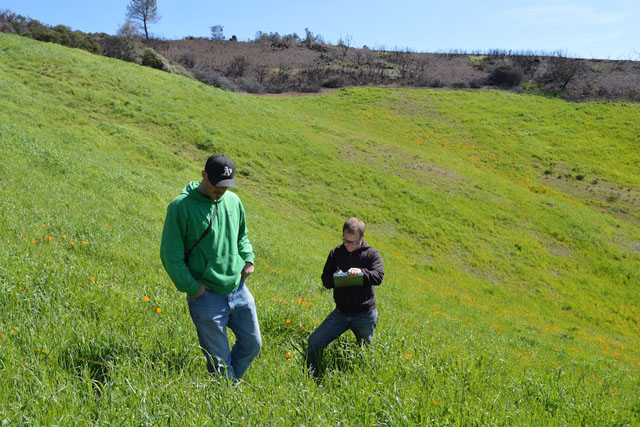 Fast forward to April 2015—almost exactly a year later. The same swath of grassland is topped with brown thatch from last year, and fewer and smaller plants are coming up underneath. In the chaparral, though, chamise sprouts are waist high in some places. In fact, chaparral vegetation is now so thick it’s hard to run a 50-meter line through it. But Bartosh and Peterson trippingly manage, so they can analyze 25 one-square-meter plots along its length. Noting the species and estimating their percentage cover in each jungle-like plot is difficult as well. And it’s only year two. “Year three is going to be a real bugger!” Bartosh says. There’s no shortage of splendid sights along the way: a sea of pale yellow whispering bells framed by a few blackened trees . . . … along with a jumble of bright yellow tar plants and fresh green yerba santa shrubs. “Only 1225 more plots to go!” Bartosh shouts at the top of the hill. That means more tedious, time-consuming, heart-pounding data collection. They see a big reward down the road, though: a deeper understanding of Diablo’s vegetative patterns and processes. Bay Nature will cover the results of this study and other post-fire scientific work in the October–December 2015 issue of the magazine.