We’re climbing, the morning is hot, and our destination is up a steep hill in the Marin Headlands, but the pace and the conversation of my companion, Stephen Sharnoff, are both quite relaxed.

“Walking and hiking are my favorite ways to spend time outdoors and always have been,” he says. And Sharnoff has spent immeasurable time outdoors, spurred by a passion for the beauty and fascination of the living world. Subjects he has studied, mainly through photography, range from slime molds to the farm landscape of Provence, but one subject above all is associated with his name: lichens. And lichens—a durable union between an algae and a fungus—are the reason for our walk up this coastal headland.

They are also the subject of Sharnoff’s definitive A Field Guide to California Lichens. Its publication by Yale University Press in 2014 represents the final chapter in a story spanning many years and many miles. I sought out Sharnoff to learn why and how he devoted so much time and energy to a relatively obscure life form. In his typically generous fashion, he invited me to visit the place where his journey into the world of lichens began.

Two-thirds of the way up the hill, he leads me off-trail on a scramble along the hill’s crumbly contour. He wants to show me an exceptional lichen community living on a weathered stony outcrop above the Pacific Ocean. He points to a boulder that sports a bright yellow crust on its shaded face and a shrubby tuft of gray-green along its crest. The former is Acarospora socialis, a fairly common species found on rocks in California. The latter appears to sprout up out of the rock. Touching it lightly, Sharnoff explains, “This is Niebla—found only along the immediate coast of California from this point south. It’s one of about 20 lichen species that are unique to this life zone. With no rainfall at all for about half the year, they survive by soaking up fog off the ocean.”

This particular Niebla specimen could really use a drink of fog right now. “It’s extremely dry and brittle now but will be far more pliable—and colorful—when it gets wet,” he says. “When lichens take in water, their outermost layer becomes translucent so the algae just beneath can photosynthesize. They seem to literally glow with color then.”

Along with his late first wife and fellow lichen enthusiast Sylvia, Sharnoff first visited this site in 1975. The Sharnoffs learned that ecologists had dubbed this area a “fog desert.” The pair subsequently found the same peculiar lichen assemblage, and fog desert habitat, at numerous locations between the Marin Headlands and northern Baja California, all within a mile of the ocean.

“I remember looking at the lichens on the rocks here for the first time and being amazed by their abundance, diversity, and strangeness,” Sharnoff says. “Sylvia and I had already been taking pictures of lichens for some time, but that was the moment when we really started to think the project should become much bigger… that lichens were a whole new universe worth exploring.”

The new universe became the Sharnoffs’ life adventure during a quarter-century of study and travel. Sylvia Duran Sharnoff, before her untimely death from cancer in 1998, was the source of keen curiosity and persistence that drove their “lichen project.” Stephen has since remarried, traveled and lived abroad, completed his field guide to California lichens, all but completed a photographic guide to Sierra Nevada flowers, and begun his next big inquiry. Yet Sylvia’s curiosity continues to inspire his work, particularly with lichens. Over the course of several visits with Sharnoff, I asked him about this long-lasting passion for lichens.

SS: At the time we began, in the early 1970s, only a few scientists, and a few artists, had really noticed lichens. Though they add texture to trees, shrubs, and rocks, lichens seemed to be almost invisible to most people. Focusing on lichens was an example of Sylvia’s talent for picking up on subtle things that others had missed. It was her particular genius to see that this was a niche waiting to be filled: There were well-illustrated books about birds, flowers, mushrooms, almost everything that has a presence in the landscape, yet lichens managed to remain overlooked in spite of being strange, often beautiful, and sometimes quite conspicuous.

CP: So how did you set out to address that oversight?

SS: Our journey really started with Sylvia’s father, Victor Duran—someone who could do or make just about anything. At various times he was a botanist, entomologist, carpenter, machinist, and photographer. In the 1930s Victor became head of the Scientific Photography Laboratory at the UC Berkeley, a position he held for about 25 years, until his retirement. The lab provided photo services for scientists on campus, mainly for biologists. Vic’s skills as an inventor and machinist were put to constant use, and he pioneered a number of techniques of close-up photography, often making his own equipment.

Victor gave us an enormous boost right from the start by making us some special equipment. Getting good photos of tiny, three-dimensional subjects is hard, because the depth of field becomes very limited at close-up range. Using a tiny aperture improves the depth of field, but that calls for a lot of light on the subject. A single flash makes a very harsh light, with deep shadows, so Victor invented super-adjustable brackets that held two flashes that we could position and aim anywhere we wanted. We could take pictures of an area about the size of a half-dollar coin and still get clear, well-focused photos, without fussing with tripods. We became practiced at composing our pictures while bracing our elbows against trees and rocks, holding the heavy camera-plus-flash apparatus in position.

CP: You and Sylvia braced your elbows on many surfaces across North America. How did your journey take shape?

SS: We exhibited our lichen photos at the Oakland Museum in the mid-1980s, and that show then went on tour. That’s how we met the eminent Canadian lichenologist Dr. Irwin Brodo, which led to our collaboration with him on Lichens of North America (Yale University Press, 2001).

Sylvia and I made several long trips—probably some 30,000 miles in all—between 1992 and 1995 to get the photos for the book. We outfitted an old-style motor home, and it was so full after we packed all our gear that we named it after the bear-puppet mascot our daughter had given us, the “Bearly Fitz.”

CP: It seems your lichen adventures could fill a book. Which ones are particularly memorable?

SS: Very early on we were invited on an expedition with Brodo and his wife, an entomologist, to the Queen Charlotte Islands. The Charlottes have been isolated from the mainland of British Columbia long enough to evolve animals and plants that are distinctly different from their mainland counterparts. These island endemics include lichens and also exceptionally large black bears. Irwin arranged for transport by helicopter to some remote sites, where he found a number of very rare lichens.

Another occurred in 1993, at the end of our first year in the Bearly Fitz. We met up with a group of Oregon State graduate students who were working with Steve Sillett in the Andrews Experimental Forest in the Oregon Cascades. They had placed a platform 180 feet high in an old-growth Douglas fir to document the mosses and lichens growing there. They rigged some climbing gear in a neighboring tree, and Sylvia and I hauled ourselves and our gear up there to photograph their work and some of the lichens they found.

CP: And now, after many years, you’ve finally completed A Field Guide to California Lichens.

SS: Yes. I already had most of the photos I needed for the book from our earlier travels. But because I ended up having to write the text as well, the book took a lot longer to finish. California with its great diversity has about 1,500 of the 5,400 lichens known from across the continent, and the book contains about 500 of those species.

Finishing the California lichen book has meant closing a long chapter of my life. I’ve spent 40 years photographing lichens! Now I’m moving on to other interests, and while I’ll always notice and love lichens wherever I encounter them, I’m no longer making any sort of project out of them. But lichens opened a door into a new world, which was, of course, the world that was always here.

CP: And at present?

SS: My most recent project is essentially done; it’s a guide to Sierra Nevada flowers, illustrated mostly with my photos. It should come out in the next year or two.

But I always have a new interest! Right now, it’s old-growth Douglas fir forest. Why do we have major parks dedicated to preserving redwood groves but nothing of the kind for Douglas firs? People never think about those really ancient, towering trees, in forests so full of diversity. That’s because large, primal stands of old-growth Doug fir hardly exist anymore!

Soon after our Headlands walk, Sharnoff took off from his Berkeley home, in search of sites in Northern California where old-growth Douglas fir survives. His objective: to explore, photograph, engage with people, and doubtless salute the fungal-algal beings he encounters along the way, the ones that started him on this path. 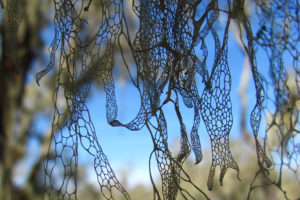 Flying Lichens, Like Old Man’s Beard, Find a Way to Live on Air