Let us pause for a moment to praise the mosquito’s proboscis, a delicate, hair-fine extension that the female of the species wields as efficiently as a nurse with a well-aimed syringe, drawing the blood she needs to nourish her developing brood. That proboscis, along with a pair of large compound eyes, feathery antennae, a dainty, helmet-shaped head, muscular thorax, slender abdomen, six spidery legs, and tiny yet powerful wings, all comprise an excellent architecture that has effectively served up the generative soup for these ubiquitous arthropods for more than 30 million years. There are today around 2,700 different species of mosquito. Related to flies, midges, and black gnats, they can be found in every part of the world except Antarctica.

My fascination with mosquitoes dates back to a girlhood summer in a small Montana town affectionately renamed “Mosquito Junction” by my mother and her four housebound offspring. The heat, the captivity and what seemed like the constant whir of mosquito wings were maddening and, as is sometimes the case with victims, we grew to admire our tormentors. No doubt the necessary requirements for mosquito reproduction—heat, standing water, and a ready blood supply like livestock or a passel of kids—were there in abundance because the mosquito population in our town was booming. They were the community’s most active inhabitants, providing the wellspring for what passed as conversation. There was nowhere we could go without becoming an integral part of the mosquito’s life cycle, our thin legs measeled with the itchy pink welts that marked us as their thralls.

What I didn’t know at the time was that our Montana town’s mosquito population was by no means exceptional. Mosquitoes can proliferate in almost any environment when they are not constantly monitored and managed. Marsh, mountain, forest, shore, hill, dale—all are potential hatcheries. At one time, for example, parts of California belonged to the mosquito, the Native Americans routinely abandoning coastal and lowland areas in an effort to elude them. Spanish diaries from the 18th and 19th centuries refer to “vicious hordes of mosquitoes.”

Attracted by visual, thermal, electrical, and olfactory stimuli (mosquitoes can sense carbon dioxide and lactic acid—that means you—at up to 100 feet), the female descends, pierces the skin of her host with a stylet, and deposits a tiny amount of saliva that acts as an anticoagulant. She then fills up with the blood she needs to develop the eggs that she deposits singly or in little rafts on water, or in the case of the aedes mosquito, in shady, wooded areas that will eventually flood.

Supported in a watery world, her offspring metamorphose from egg to stick-like translucent aquatic larvae, then to whiskery, shrimp-shaped pupae, and finally into adult mosquitoes. Fruit- and nectar-drinking males mate with the females and die. Females then batten upon their unfortunate hosts and the cycle begins again. The whole process can take months or mere days, depending upon conditions. Female mosquitoes can even overwinter with a cargo of fertilized eggs, just waiting for a little warmth to release them. After mating once, the females can bite again and again to produce one batch of eggs after another, each time leaving a tiny souvenir of saliva to itch and burn and cause varying degrees of discomfort.

Unlike other insect pests such as yellow jackets, imported red fire ants, and Africanized honeybees, mosquitoes, though irritating, are not venomous. Like ticks and fleas, they are vectors, the bombardiers of the virus and parasite worlds. And while mosquitoes cannot transmit all diseases—HIV, for example, cannot survive or replicate in mosquitoes—they are still responsible for the spread of a host of others. Malaria, heartworm, yellow fever, dengue fever, equine encephalitis, and West Nile virus are all carried by mosquitoes. In 1909 malaria alone claimed more than a hundred lives in California, precipitating a statewide alarm that culminated in the Mosquito Abatement Act of 1915 and with that an ongoing battle against mosquitoes and the diseases that they convey.

According to UC Berkeley professor emeritus Bill Reeves, medical entomologist and pioneer of encephalitis surveillance, at one time mosquito populations around the Bay were massive. Some coastal areas could not be developed because of the insects. He remembers being besieged on campus as recently as the 1930s. “There was a time when you couldn’t show property in Marin [because of proliferating mosquito populations],” agrees Jim Wanderscheid of the Marin-Sonoma Mosquito and Vector Control District.

“[Today,] if we stopped killing them for a couple of months, you’d know it in a hurry,” adds Napa County Mosquito Abatement District Manager Wesley Maffei.

“Mosquitoes,” says John Rusmisel, Alameda’s Mosquito Abatement District Manager, “are everywhere.” They are found in all types of watery environments, large or small: salt marshes, pools, creeks, residential ponds, catch basins, standing water in the boles of trees, ceramic pots, old tires, and fountains. Half the houses in the Bay Area have a mosquito source, according to Rusmisel. The key, he says, is to identify the source and eliminate it before the mosquitoes develop. Technicians from some of the more than 50 mosquito and vector control agencies in the state work year-round inspecting areas listed as possible sources, looking for signs of the insect, identifying life stages, and determining whether to treat and how. In November and October they carefully watch the salt marshes, moving to canyons and hills where treehole mosquitoes are likely to breed in February and March. From March to October they concentrate heavily on backyard problems.

Alameda’s Rusmisel warns that we may be seeing an increase in mosquitoes and mosquito-borne diseases in the months and years to come. In his district, calls and inspection requests are up from previous years. He cites more created wetlands next to residential areas and development close to existing wetlands, additional storm water treatment plants, increases in general recreation activities in wetlands, and budget cuts in abatement and vector control agencies as potential causes of the increase. Though the majority of mosquito bites result in nothing more than an irritating itch, West Nile virus, which is moving inexorably up from the southern part of the state, is of major concern to Rusmisel and his colleagues. “West Nile is a big deal,” says Rusmisel. “People will die [from it] no matter how good a job we do.”

Of course, experts like Rusmisel stress, the idea is not to eliminate all mosquitoes but to prevent the proliferation of those that constitute a health risk. Mosquitoes, after all, really do serve a purpose. They are a food source for everything from invertebrates like damselflies and water beetles to fish and frogs and bats and birds. Both males and females can serve as pollinators of small wildflowers like alkali heath or gum plant, dandelion, and other members of the compositae or sunflower family. They are an integral part of any well-balanced natural environment, and as long as we are fortunate enough to surround ourselves with healthy natural ecologies, mosquitoes will be a significant component of the food web and so, for that matter, will we.

When she’s not on the road, Linda Watanabe McFerrin—travel writer, poet, novelist, and writing instructor—lives and writes in Oakland. She is the editor of Best Places Northern California and co-creator of the popular travel anthology Wild Writing Women: Stories of World Travel. Her story on Lake Merritt appeared in the January 2001 issue of Bay Nature. You can reach her through www.lwmcferrin.com. 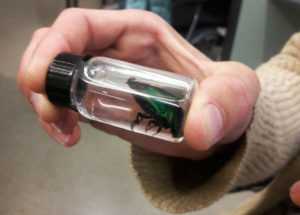