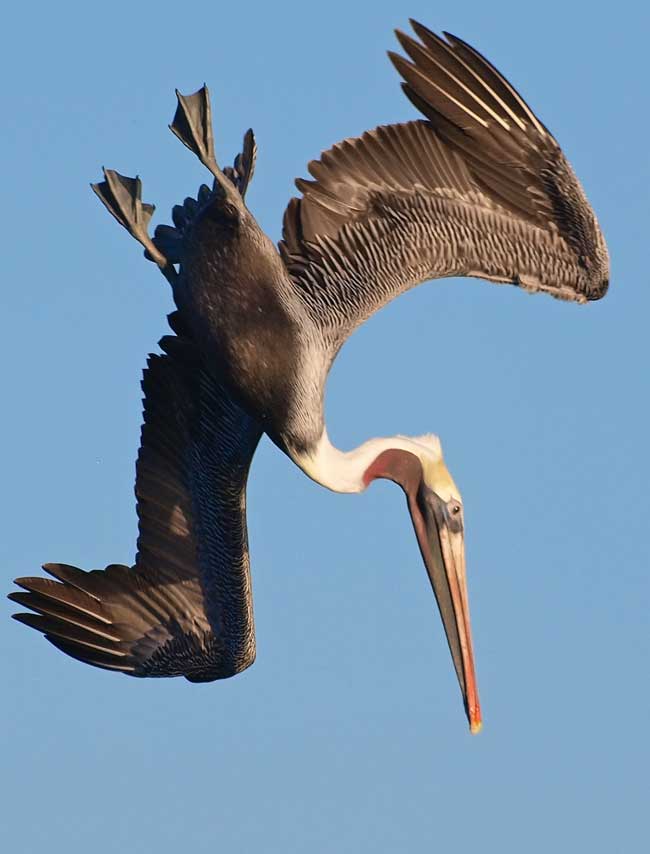 Brown pelicans hunt by sight, and when they see a likely prey fish, they drop into a steep dive, crashing spectacularly into the water. Creative Commons photo by Ingrid Taylar.

Though California brown pelicans are the smallest of all pelicans, they are still very impressive birds, with wingspans occasionally as big as eight feet. The birds we see here in the Bay Area commute back and forth from nesting areas in Baja and on the Channel Islands near Santa Barbara. They start the trip south in the fall and return in late spring, following warm weather and changes in ocean temperature.

Watch for them flying in lines just over the water’s surface at places like Ocean Beach and Crissy Field or along the Embarcadero. A good spot to see them resting is at the ends of the piers at Fisherman’s Warf. If you’re lucky, you’ll see them hunting. They wheel up, then dive precipitously into schools of fish, gulping down whatever they find. A group of pelicans flying in formation over San Francisco Bay. Photo by Todd Gilens.

Brown pelicans came close to extinction in the 1950s and 60s. The pesticide DDT, then in wide use, moved through food chains in both land and water. Among many other effects, it resulted in paper-thin eggshells that would break in the nests. During the 1960s, California’s pelican colonies shrank by 90 percent. In 1970, only one chick survived out of 550 nests, and the brown pelican was placed on the Endangered Species List. But since the banning of DDT in 1972, the birds have made a gradual comeback, and they were removed from the Endangered Species List in November 2009.

But that’s not the end of the story. The California pelican population is now threatened by a toxin called domoic acid, produced by certain kinds of algae blooms. Domoic acid has been blamed for the deaths of many pelicans, seals, and sea lions in recent years, though scientists are still struggling to understand what causes the blooms, just how many birds and sea mammals are effected, and whether changes in ocean temperature or acidity might be at the root of the problem.

At the same time, the Deepwater Horizon oil calamity in the Gulf of Mexico threatens to wipe out Louisiana’s population of breeding pelicans, which was also removed from Endangered Species protection last year, after the original population was completely destroyed by DDT and painstakingly repopulated with birds from Florida.

Only time will tell how these pelicans and their cousins here in California will fare in the face of these new threats.

Learn more about the brown pelican:

What’s the deal with the pelican’s weird bill?