If you look up any of the lost species featured in the pages of our October-December 2007 feature Presumed Extinct, you’re likely to find just that—the words presumed extinct followed by a brief natural history account, if you’re lucky. In the hope that these lost species might someday become Lazarus species—plants and wildlife that rise up from the dead—we’ve put together a field guide to help Bay Area naturalists in their search for the next Holy Grail.

While the likelihood of finding a lotis blue butterfly or Pitkin Marsh Indian paintbrush in your backyard or on a weekend hike are slim-to-none (both are restricted to private property), there’s no reason why a mail carrier might not stumble across a Palo Alto lost thistle on her way to the post office, or an itinerant hiker might not hit upon a Strohbeen’s Parnassian butterfly in the Santa Cruz Mountains. Or, realistically, why it’s worthwhile to reach for your field guide the next time your housecat leaves a present on the doorstep—it could be a Berkeley kangaroo rat! And then there’s Rich Mooi’s offer to those interested in visiting the California Academy of Sciences to learn about the Bay’s benthic creatures, a free ticket to paw through jars of mud in search of the San Francisco horseshoe shrimp. So read up; we’re counting on you to keep your eyes peeled! FIELD NOTES: the lotis blue is often described as a larger version of its fellow blue, the Melissa blue butterfly (Lycaeides melissa); the lotis blue’s flight period is mid-April to June RANGE: known only from Clear Lake in Lake County

HABITAT: Clear Lake and its tributary waters, plus an outlying record from Cache Creek (downstream of Clear Lake)

FIELD NOTES: a lake-bound cousin of the Sacramento splittail (P. macrolepidotus), Clear Lake’s shoreline splittail wasn’t officially described until 1973, approximately the time it went extinct; aside from geographic isolation, the differences between the species are morphological; compared to the Sacramento splittail, the Clear Lake splittail has more gill rakers, more lateral line scales, smaller fins, a terminal mouth with absent or reduced barbels, and a relatively symmetrical tail fin

Inland Fishes of California, by Peter B. Moyle

FIELD NOTES: thicktail chub remains are reportedly common in Native American middens along the Sacramento River, and have been recovered from 19th-century Chinese privies in San Francisco’s Mission District; in the 19th century the fish was commonly sold in San Francisco fish markets and was served in Sacramento saloons; compared to other chub, the thicktail chub is a heavy-bodied fish with a small, cone-shaped head, greenish brown to purplish black back, and yellowish sides and belly

Inland Fishes of California, by Peter B. Moyle Illustration based on Shasta crayfish photo by B. Moose Peterson/WRP

FIELD NOTES: the sooty crayfish hasn’t been seen in over 100 years; the sooty crayfish closely resembles its cousin the Shasta crayfish (Pacifastacus fortis) but is blackish, smaller in size (4 inches long), and has more slender, hairless hands (claws)

Ask the Naturalist—All the Crawdads You Can Eat (Bay Nature), March 13, 1996, by Michael Ellis

FIELD NOTES: although extensive sampling has been done to rediscover this shrimp at its type locality and other collection locations, “searching” for this species amounts to sorting through Bay mud; mud-raker Richard Mooi of the California Academy of Sciences has generously offered would-be shrimp seekers the opportunity to pick through jars of mud—with the proper training, of course—to make sure no horseshoe shrimp have been overlooked— Reach Mooi at (415)321-8270. RANGE: known only from Palo Alto in Santa Clara County

FIELD NOTES: with nothing but “Palo Alto” recorded for the type specimen’s collection location, botanists know nothing about this thistle’s preferred habitat; notes to the effect that the species represents an introduction from the Old World are unsubstantiated and the species is still recognized today as a native California thistle 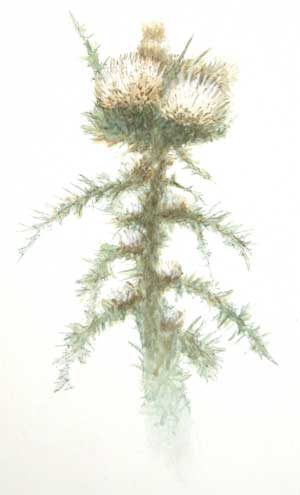 FIELD NOTES: the Pitkin Marsh Indian paintbrush grows solely in association with rhododendron plants in a type of hemiparasitic relationship; all known plants were reported on private land, which has prevented further surveys to determine if any unrecorded plants have persisted FIELD NOTES: the Berkeley kangaroo rat closely resembles the Tulare kangaroo rat (D. h. tularensis), but can be distinguished by generally darker hairs, especially along the back, as well as darker broad stripes along the sides and tail, and smaller patches of lighter hairs on the ears and face; look for k-rat hunter Gary Beeman’s “Wanted!” posters in kiosks surrounding Mount Diablo State Park; if you want to tip off Beeman about a potential k-rat in your neighborhood, you can reach him at (925)284-2602

The California Department of Fish and Game maintains regularly updated lists of the state’s special-status plant and animal species, from high-profile threatened and endangered species to “species of special concern,” whose populations are dwindling and may warrant state or federal listing action in the future.

The U.S. Fish and Wildlife Service and the California Department of Fish and Game aren’t the only agencies working to protect and conserve species and their habitat. There are many organizations and institutions that devote time, money, and resources to research and conservation efforts on behalf of plants and wildlife in the Bay Area, not to mention world-wide. Those whose goals and sphere of influence overlap with the Bay Area’s lost species are listed below:

The University and Jepson Herbaria

Herbarium of the California Academy of Sciences

Speak of the Devil: The Unexpected Landscapes of Mount Diablo

REDISCOVERED “LAZARUS SPECIES” AROUND THE WORLD, AND MORE

When so-called “extinct” species rise from the dead—as we hope our lost Bay Area species are fated to do—they become what are appropriately referred to as “Lazarus species.” You can learn more about such species and how they become extinct, as well as test your knowledge on global extinction—through the links below:

“How are species classed as extinct?”