As we pause on the trail, Lisa Wayne unfolds two photos of the urban creek burbling past us. Taken eight years apart, the snapshots show that where a stand of eucalyptus trees once stretched along the creek, now willows, dogwoods, and elderberry grow. “You can see there’s actually a good amount of water in the creek now, and it’s supporting migratory birds and local wildlife,” says Wayne, who manages the newly anointed, and long embattled, Natural Areas Program for the San Francisco Recreation and Parks Department.

The tranquil creek, riparian corridor bustling with birdlife, and open hillsides of Glen Canyon Park in southern San Francisco embody a plan to protect and restore the city’s few remaining native habitats and species in 31 “natural areas” within city parks and to help residents become stewards of San Francisco’s natural heritage. “The point of the program is to try to keep biological diversity around for future generations, keep ecosystems healthy, and keep people involved,” Wayne says. “And provide people with ways to interact with [natural areas], whether it’s on a trail, leading a school group, or taking a dog on a walk.”

After a more than 20-year process, the Significant Natural Resource Management Plan jumped through its final regulatory hoops earlier this year. The plan aims to increase the biodiversity of about 1,100 acres in the SFRPD’s 3,500 acres of parkland over a mix of habitats—from streambeds and forests to coastal scrub and grassland meadows—with the help of community volunteers. The natural areas range in size from 0.3 acres of the 15th Avenue Steps park to 395 acres of Lake Merced Park. To help habitats and the roughly 140 sensitive species in the parks rebound, the plan prescribes removing invasive species and some nonnative trees and enforcing on-leash dog areas.

That’s how the plan became controversial.

In the 1990s, several grassroots San Francisco environmental groups launched a pioneering plan to protect and enhance habitat in urban areas. “We were beginning to see that species were being lost,” says Sarah Madland, director of policy and public affairs at the SFRPD. “And this conversation wasn’t just to be had at Yellowstone and Yosemite. We understood that we in the urban environment had a role to play.”

But the effort bogged down quickly in the details: How do you preserve natural areas while also providing recreation for people and their dogs? Which areas are most important to preserve, and why? How far should the city go to bring back native habitats when people also enjoy nonnative trees, such as eucalyptus? Through the early 2000s, as major cities like New York, Chicago, and Paris pursued commitments to urban biodiversity and natural areas, San Franciscans continued to debate nonnative tree removal, leash laws, and golf courses.

Last year a final version of the environmental impact report (EIR) of the management plan that ranks the species and habitat value in the 31 natural areas—an approach settled on by SFRPD and community groups—was affirmed by the board of supervisors. Areas with high biodiversity, sensitive species, or significant potential for restoring biodiversity—including the possible reintroduction of species on the edge of local extinction, such as the mission blue butterfly on Twin Peaks—became priority sections within the natural areas. In these critical sections, management will include removing invasive species—using herbicide as a last resort—and nonnative trees and reintroducing sensitive species. In less biologically critical parkland, sensitive species may be reintroduced, and there will be limited tree removal and maintenance of native plant communities. The least sensitive areas will be left as is with few restrictions on recreational use.

A look around Glen Canyon is a glimpse of what natural areas elsewhere in the city will try to achieve: hilly grasslands where flowers bloom in the spring and red-tailed hawks soar, a seasonal natural creek that runs through willows and open meadows, outcroppings of Franciscan chert where snakes and lizards thrive. A trail that winds along the creek bed climbs up toward Portola Avenue and then to Twin Peaks, where mission blues fly in another natural area.

The potential of Islais Creek as a natural water source made Glen Canyon Park an obvious choice for restoration even before the Natural Area’s Program existed, Wayne says. “Water sources themselves are pretty limited in San Francisco for wildlife, so these remnants—these little bits of creek that remain—are really important.”

To help restore Glen Canyon’s habitat, the Natural Resources staff explored comparable Bay Area Franciscan landscape sites that have been comparatively undisturbed. For Islais Creek, the team looked at similar streams in San Mateo and Marin County. Now the creek bed and Glen Canyon’s 60 acres of natural area support common urban wildlife, such as ringneck snakes, gopher snakes, salamanders, skunks, and raccoons. As a hummingbird beats by, Wayne notes that sparrows and warblers, as well as dark-eyed juncos, visit the creek—resting on restored native plants like, wax myrtle, and the deciduous red alder.

Audrey McNamara is a Bay Nature editorial intern and a news editor at the Daily Californian. 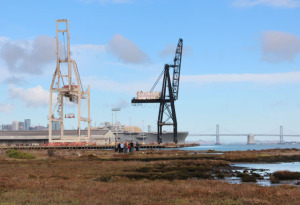 Pier 94: By the People, For the Birds