Months into the Donner party’s winter ordeal, an Indian man traveling past the group’s snowbound Sierra encampment gave one of its members an unfamiliar food. Donner party survivor Patrick Breen wrote in his diary on February 28, 1847, “Solitary Indian passed by yesterday come from the lake had a heavy pack on his back gave me 5 or 6 roots resembling Onions in shape taste some like a sweet potatoe, all full of little tough fibres.” Those “roots” were dried bulbs of the soaproot plant and must have been a strange but welcome addition to the boiled oxhide, bones, and worse that sustained Breen and his family.

Food seems an unusual use for a plant called soaproot. In fact, food is just one of many traditional California Indian uses for the plant, some apparently contradictory. Soap, food, glue, medicine, poison, and more — all from a hairy, fist-size underground bulb.

Even without the snow, the Donner party wouldn’t have found soaproot near their camp at Truckee (now Donner) Lake. The most common soaproot species, Chlorogalum pomeridianum, is widespread in California, but only below 5,000 feet. In grasslands, chaparral, and open woodlands, soaproot begins its annual cycle of growth with the fall or winter rains. That’s when the elongated bulb, layered like an onion and covered with coarse brown fibers, sends up several long, prostrate, wavy-edged leaves. Harvested in early spring and slow-roasted in a pit oven, those new leaves are sweet. So are the bulbs when they’re cooked the same way. But before cooking, the bulbs are bitter — and soapy.

Soap was likely the plant’s most important use for numerous California Indian tribes as well as Spanish settlers, who called it amole. Crushing the bulb’s white inner layers produces a thin juice that foams easily with water. Organic (carbon-containing) compounds called saponins are responsible for the sudsiness: They reduce the surface tension of water, allowing small, stable bubbles to form. Indians used soaproot to clean their bodies, clothing, and buckskin blankets, but valued it most as a shampoo.

Roasting the bulbs thickens the juice into a glue used for sealing baskets, attaching feathers to arrow shafts, and even forming the handles of brushes fashioned from the bulb’s outer fibers. Green sap from the leaves made tattoo ink, and juice from the bulb made a hide tanning treatment as well as medicines like antiseptics, laxatives, diuretics, and pain-relieving body rubs.

But one species’ panacea is another’s poison: The same plant that people used as food, for cleaning, and for healing is toxic to gill breathers, and California Indians sometimes exploited that property in fishing. While the men of a village constructed a netlike weir across a stream, the women mashed hundreds of soaproot bulbs and tossed them into the water. In a very short time, dozens of fish floated to the surface.

“The surface-active saponins stun the fish by interfering with uptake of oxygen through the animals’ gills,” explains organic chemist Margareta Séquin, author of The Chemistry of Plants: Perfumes, Pigments, and Poisons. But the effect is reversible, so the Indians had to gather the fish quickly before they revived. Because saponins pass through the human digestive system without causing harm, fish caught with soaproot are edible.

But fishing with poisons is now illegal and most non-Indians ignore native foods, so most of the attention soaproot gets these days is from insects that visit its flowers. From late spring into summer, numerous small white blossoms open late in the day on tall, branching stalks so slender the flowers look like low-hanging stars in the fading light. Each individual flower is ephemeral, opening a few hours before sunset and fading before dawn.

By late summer, dozens of seeds drop around the mother plant, some of which will take root and eventually form a sizable colony. A few weeks later, the leaves and flower stalks wither and blow away, and soon the only aboveground sign of the plant is a short tuft of brown fibers marking the location of its bitter, soapy, toxic, gluey, medicinal, and very sweet bulb. 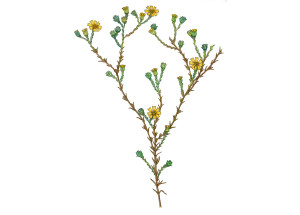