Check out these and other hikes Jules has taken on this Google map. The most recent hike is in blue; others are in red.

The Rift Zone trail begins at Five Brooks Pond, a manmade millpond built by the Sweet Lumber Company that operated here from 1956 until the park was established. Now naturalized and surrounded by willows, the three-acre pond is one of the best places in the Olema Valley to see puddle ducks. Today, American wigeons are the common ones here, whistling quietly as they siphon duckweed from the water’s surface; a few gadwall are mixed in with several very smartly dressed ring-necked ducks, and a pair of wood ducks scuttle beneath some overhanging willows.

This is perhaps the best place on the peninsula to see wood ducks and Pacific pond turtles, and occasionally green heron, kingfisher, and, on warmer days, swallows, dragonflies, and damselflies. A northern flicker calls, perched atop the willows. It’s in unusual plumage: a male with a red whisker characteristic of the western race (formerly known as “red-shafted” flicker) but also with a red crescent on the hindneck, characteristic of the eastern race (formerly known as the “yellow-shafted” flicker). So this bird is a hybrid, an intergrade between these distinct races. When the bird flies, he flashes orange (rather than red or yellow) wing linings.

The first quarter-mile of the trail–through a dark corridor of fir and bay–leads to the Stewart Horse Camp, an open field bordered on the east edge by Olema Creek, flowing north toward Tomales Bay. Red alders line the creek bank and this time of year they are leafless, but adorned with dangling catkins and cone-like fruits.

Alders, like willows, are a pioneering species, colonizing nutrient poor flood plains to form dense riparian corridors. Their root systems host nitrogen-fixing bacteria (the actinomycete Frankia) in a mutually beneficial exchange–the bacteria leaks nitrogen to the tree and the tree, in turn, passes carbon, produced through photosynthesis, to the bacteria. Symbiosis. (Once again, the ancient ones show us the secret of evolutionary survival: cooperation.) A flock of pine siskins, a streaky relative of goldfinches, bursts from the alder canopy, calling its insect-like, buzzy “zree-e-e-e-e-eet” with a rising inflection

Siskins have a particular affinity for alders; their sharp bills well adapted for feeding on the small winged nutlets that are contained in alder cones.

Just beyond the horse camp, the trail climbs a small rise and passes a cattail swale off to the left. The small wetland supports a fetching stand of redstem dogwood, its brightly colored stalks just budding up.

Although no bedrock geology is exposed along this trail, it offers some subtle clues to the forces at that underlie the peninsula. The route follows the Olema Trough, a narrow section of the rift zone, where the Pacific and North American tectonic plates nearly abut. The San Andreas Fault is not a perfectly straight nor is it a single fault line. In many of its sections it is made up of a number of parallel strands–blocks of rocks that move up and down relative to one another depending on how the fault shifts on either side of the blocks. The fault’s trace in the Olema Trough is evident in a series of sag ponds, small depressions in the terrain that form between two fault strands that have moved apart causing the land between them to sink, or sag. Water collects in the lowest parts of the depression that forms between two blocks to create the ponds. Other names for sag ponds are rift ponds, or fault-trough ponds or lakes.

One of a series of sag ponds on Vedanta property with young bulls wading in the shallows. Photo by Jules Evens.

The San Andreas Fault is a right-lateral strike-slip fault, meaning if two people were facing each other when the fault moved, each would see the other move to the right, with the person on the Point Reyes side moving north and the person on the American plate staying in place. Because the San Andreas will slip to the right, it is classified as a dextral strike-slip fault.

The Pacific plate that lies underfoot along the Rift Zone trail is twisting inexorably to the northwest (counterclockwise) along the edge of the more stable American plate. This plate boundary is considered active, and the movement is relatively speedy in geologic time, estimated at two to three inches a year, or about the rate at which our fingernails grow. The bedrock of the Point Reyes Peninsula, on the west side of the fault, is a huge, relatively homogeneous island of granite, known as the Salinian block. Just across the Olema Valley, the geology on the east side of the fault is entirely different; a hodgepodge of rock from a variety of sources tagged Franciscan formation. This Franciscan assemblage is the primary component of the rumpled coast range of California. View across the Olema Valley to the coast range hills. Although less than a mile distant, the bedrock geology is entirely different than that of the Point Reyes Peninsula. Photo by Jules Evens.

In his book Assembling California John McPhee calls the Franciscan formation “a boneyard of exotica,” a melange of rock of “such widespread provenance that it is quite literally a collection from the entire Pacific basin, or even half of the surface of the planet.” Paradoxically, Point Reyes’s origin is the continental crust, so, here we have a granitic orphan from the continent floating northward, and westward, of the Franciscan complex with oceanic origins.

About half of the Rift Zone trail passes through property of the Vedanta Society, a Hindu retreat of 2,000 acres that is encompassed by the national seashore. This community was established in 1946 and has served as a meditation center since. The trail is granted as an easement to the Seashore, so we hikers are guests of the Vedanta Society of Northern California.

After entering the Vedanta property, I find a fallen log beside the trail in an opening in the forest, bathed in sunlight, a perfect place to stop for lunch. As I sit cutting my bread and cheese, an immaculate white butterfly lights on a blade of grass by the trailside and pauses there just long enough to pose for a photograph.

There are several sag ponds along the way, most amid open fields as the one pictured above. But within the deep shade of a forested grove, I come upon another pond heavily vegetated with cattails and surrounded by conifers. I’m surprised and delighted to find a small family grove of coast redwoods, which is surprising, because this tree is virtually absent west of the fault on Peninsula bedrock. I know of only one grove, up McCormick Creek, a tributary of Pine Gulch Creek, at the southern end of the peninsula.

Whether these are native or planted I’m uncertain, but if indigenous, they must be second growth, burl sprouts from ancestral trees. Their “small” size, about seven feet DBH (diameter at breast height), suggests they sprouted about the time Vedanta was founded, perhaps during some logging operation that preceded the Sweet Logging Company. 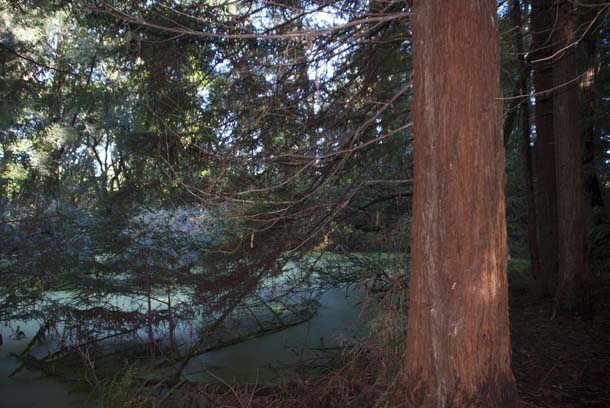 Coast redwoods alongside a sag pond amidst the forest, Vedanta Retreat. Photo by Jules Evens.

The pond here is heavily shaded and thickly vegetated with cattails, little open water. I remember hearing a Virginia rail call here on hike many years ago, and clap my hands to see if I can elicit a response. Sure enough, instantly the familiar grunting call of the rail emanates from the cattails, a sound we often liken to the laughter of a “dirty old man.”

Farther along the trail, nearing park headquarters, the path crosses the main entry road to the Vedanta Retreat where the “Vivikananda Bridge” crosses Olema Creek. Swami Vivikanada (1863-1902) was a much revered Hindu holy man, teacher of the Upanishads (also called the Veda, hence the retreat’s name).

Once the trail returns to national park land, it follows the edge of an open field then climbs gradually up a small hill into a small stand of coast live oaks, in spring, a good place to find oak-woodland birds rare elsewhere in the park–Nuttall’s woodpecker, oak titmouse, chipping sparrow, and occasionally lazuli bunting.

After crossing a small footbridge, the trail wends through a savannah of bay trees back to park headquarters. This is a good place to pick up the Earthquake Trail, a short loop with several well-conceived signs that explain the tectonics of the San Andreas Fault and the rift zone just followed.

Returning home, I look up Swami Vivikananda’s teachings and find one quote relevant to my day’s hike: “In a day when you don’t come across any problems you can be sure that you are traveling the wrong path.”

It’s difficult to imagine, at least in these times, a day in which one doesn’t encounter a problem or two. I had wrestled with several problems (however insignificant in the grand scheme of things) along the Rift Zone path. The white butterfly that danced by while I sat on a log and ate lunch was difficult to identify to species. I was bothered by the heifers and young bulls wading in the sag ponds along the trail and the degradation of those wetlands. I was puzzled by the redwoods I found growing along one of those ponds as I’d always thought the only redwoods native to the peninsula were eight miles south of here. A “walkabout,” in the Australian sense of the phrase, is a brief leave from work to wander the bush, so given the magnitude of my problems, today’s walkabout seemed to fulfill its purpose.

The first quarter-mile of trail–down a narrow and rather muddy path pockmarked by horse hooves, through a dark corridor of fir and bay–connects Five Brooks Trail to the Stewart Horse Camp. After rain, the path is slippery and uneven; caution is advised. The portion of trail through Vedanta is easy and well marked with a few gates one should be sure to latch so cattle don’t wander out-of-bounds. As the trail emerges from the forest at its north end it crosses a large expanse of pastureland and is not well marked. Just cut diagonally across the field, heading northerly, pass a water trough, and aim toward the green metal gate. There you’ll cross the main entry road to the retreat and go through a gate, back onto Seashore property. The trail is clearly marked from here on.