You’ve probably heard that being outside in nature is good for mental health. It can measurably lower stress levels and improve memory and concentration. Some doctors have even begun writing prescriptions to go outside. Now parallel research is revealing another reason spending time outdoors, and hanging around certain animals, might improve health: some living environments may supply a naturally occurring cocktail of health-promoting microbes, an invisible probiotic that wards off disease.

To understand how this might work, you need to know about the microbes inhabiting your body. The human microbiome, as this teeming community is called, lives mostly in our distal gut, the colon, but also inhabits every nook and cranny of our bodies, from our eyes and ears to our bladders and maybe even our ovaries. We are coated inside and out with a living microbial veneer of bacteria, fungi, viruses, and archaea (as well as occasional animals like mites and parasitic worms). And if we believe the many studies on mice published in recent years, this ecosystem of microbes affects our health in myriad ways. They shield us from pathogens simply by occupying space and preventing worse from gaining purchase. They stimulate the immune system, training it so that it’s prepared to fight off invaders. They synthesize vitamins our bodies need, help us break down fiber in food, and produce important fermentation byproducts rather like a personal distillery. They may even influence our state of mind.

Many microbiologists worry about what’s happening to the human microbiome in the developed world. They fret that it’s changing in ways that make us sick. A major force shaping our microbial community is what we eat. And a diet high in fiber, including lots of fruits, nuts, and veggies and low in refined food, is probably best for the microbiome. But the more mysterious question is where the microbiome comes from to begin with and how modern life may have interrupted the acquisition of microbes whose presence our bodies actually expect.

The problem is akin to one that afflicts many external ecosystems in this increasingly human-dominated world—habitat fragmentation. A highway or a subdivision can hinder the movement of animals and plants—living source material for ecosystems—preventing the emergence of robust ecological communities. Ditto with the human microbiome. Barriers we’ve erected both intentionally and inadvertently may be warping and impoverishing our bodies’ microbial ecosystems. Those barriers include the increasing physical distance in daily life between people (people are fonts of microbes, after all); sanitary amenities like treated drinking water; and our gradual self-extrication over the past 170 years from an environment full of plants, soil, trees, and animals—the living grime of premodern existence.

We’ve done all this for good reason. Ever since scientists understood in the 19th century that germs can cause illness, we’ve sought to prevent infectious disease and save lives by limiting the sharing of microbes. But in the past 15 years or so, microbiologists have begun to recognize that the increasing isolation of our bodies also probably incurs a cost. It may deprive us of the full complement of microbes that our bodies need to function properly, increasing the risk of the noninfectious, chronic diseases that have become hallmarks of the modern disease-scape.

Consider a place called Karelia. It once belonged to Finland, but since World War II, a good chunk of the province has lain in Russia. The people on both sides of the border are genetically similar. They inhabit the same climate, make do with the same amount of weak sunlight, and have the same amount of vitamin D in their blood.

On the Finnish side, kids are as prone to allergic disorders, such as hay fever, as anywhere else in the Western world. They also have the highest rate of autoimmune Type 1 diabetes anywhere. But on the Russian side, allergic and autoimmune diseases drop dramatically, even for genotypes that are considered high risk. The Russian environment seems to protect kids from the type of immune dysfunction that causes the body to attack itself (autoimmune disease) or to attack innocuous pollens in the environment (allergic disease).

How? The Russians are much poorer than the Finns,  and more than a decade of research by scientists at the University of Helsinki indicates that the microbes the Russians encounter, which tend to come from soil, other people, forests, and animals, are richer and more varied than those in Finnish environments. Exposure to this diversity, the researchers argue, produces an immune system less prone to the inflammatory diseases that increasingly plague the developed world.

We are coated inside and out with a living microbial veneer of bacteria, fungi, viruses, and archaea (as well as occasional animals like mites and parasitic worms). And if we believe the many studies on mice published in recent years, this ecosystem of microbes affects our health in myriad ways.

And the Finnish scientists have made an intriguing discovery in Finland proper. There they found that nonallergic Finnish kids tended to harbor a greater diversity of certain bacteria on their skin than allergic kids. The bacteria belong to the genus Acinetobacter, which live on plants in soil, rivers, and lakes. Generally speaking, they abound in the living environments—forests and meadows—that we like to imagine when we think of Nature. Which could explain the scientists’ other finding: The least allergic Finnish kids who harbored the greatest diversity of these microbes tended to live near large green spaces. If allergy is a bad habit the immune system learns, these wildland microbes seemed to lessen the chance of the immune system ever learning the habit. Indeed, in rodent experiments, heat-deactivated Acinetobacter bacteria protected against allergies by spurring the production of anti-inflammatory molecules in the skin.

Based on this and other studies, the Finnish scientists coined what they call the “biodiversity hypothesis” for allergic disease. “Allergies are rare where butterflies flourish in a biodiverse environment,” the Finnish allergist Tari Haahtela wrote. Such environments, Haahtela and others say, present a variety of mostly innocuous microbes to the human body. They train the immune system in a way that prevents allergy and other diseases of immune dysfunction from emerging.

So important are some of these microbes for our health, some now argue, that we need to consider them an “ecosystem service,” a naturally occurring probiotic flowing from the living world around us into our bodies. An abundance of these microbes could partly explain the between fivefold and sixfold difference in autoimmune disease prevalence between Russian Karelian and Finnish kids and the threefold difference in allergic disease. Not only is Russian Karelia less developed, but people live in a way—drinking untreated well and surface waters, for example—that brings their bodies into closer contact with the microbes around them. Another important piece of the puzzle are animals.

For two decades, scientists in central Europe have tried to understand why kids who grow up on farms with animals tend to be far less allergic—about one-third as likely to sneeze during pollen season—than kids who don’t grow up on such farms. These researchers were the first to zero in on Acinetobacter, in particular a species common in cowsheds called A. lwoffii. It apparently not only protects mice from allergic disease; if sprayed in the airways of pregnant mice, it protects their unborn offspring from asthma as well.

The takeaway from this research isn’t that we should all obsess over Acinetobacter (although who knows what cowshed-based probiotics may eventually come to market), but rather that the kinds of microbes often absent in modern environments—but that abound in living environments—may improve human health. The driver of the phenomenon may simply be microbial diversity. In one recent study, for example, scientists found that farming increased the diversity of microbes in a child’s mattress. And the greater the diversity, the lower her risk of asthma.

Here, it’s helpful to imagine a spectrum of exposures. Russian Karelia lies toward the intense, high end of the spectrum. Nearby sit the central European cowsheds (as well as Amish cowsheds in Indiana, where the phenomenon has also been observed). A little further along are the Finnish kids who live near green spaces. And then, all the way to the low end is where most of us actually live—in a kind of microbial desert. So the challenge is: How do we diversify and enrich the microbes in our environment and push back toward Karelia without also bringing back infectious diseases?

Animals keep popping up as important, and not just cows. Dogs seem to protect kids from developing asthma in ways similar to farming—by diversifying the microbiome of the home. UCSF scientists have tested a Lactobacillus species common in homes with dogs and found that in mice, it prevents asthma and allergies in two ways. It alters the immune response to allergens like dust mites, such that clinical allergy becomes less likely. And it stimulates immunity in a way that helps the immune system ward off asthma-causing viruses. Dogs may also amplify microbial sharing between people.

One important nuance is that nearly all this research indicates that early-life exposure to diverse microbial communities is key for warding off inflammatory disease later. It’s the kids whose mothers worked in the cowshed while pregnant, and who were then lugged along during chores, who are the least allergic of all. Scientists can actually see, in these children’s slightly different white blood cells, the imprint of this early-life immunological tuning.

That doesn’t mean we shouldn’t hedge our bets, particularly if there’s no obvious harm in improving the microbial soup around us. An intriguing subfield of microbiology studies how the spaces we live and work in shape the microbial environment. University of Oregon scientists have found that hospital environments paradoxically contained more pathogen-like microbes than outside environments, perhaps for the same reason that weeds overgrow abandoned lots. The absence of a diverse, mature microbial ecosystem may allow weedy species to proliferate. Just opening the window could make the hospital microbiome healthier, the authors point out. Another study found that houseplants may diversify the microbiome in a room, perhaps benefitting its human occupants.

We don’t know if what the European researchers have observed in their countries applies to, say, the many green spaces and dairy farms of the Bay Area. Does living next to a dark, damp redwood grove supply microbes that lessen my child’s chances of developing hay fever? Does working on a dairy farm in Petaluma? The principles observed in Europe and elsewhere likely apply, but to my knowledge, no one has studied these questions in the California context.

It’s important to verify the findings because the task at hand is to reestablish migration corridors for microbes so that, without our thinking about it, they flow into our lives and improve our health. To open those corridors, we need to better understand the microbial communities immediately around us. Because it seems that all our reaching metaphors about the interconnectedness of human health and nature may be true in a literal sense. We’re only as healthy as the ecosystems around us, because those ecosystems seed our bodies with microbes, and those microbes keep us well. υ

Moises Velasquez-Manoff is Bay Nature's senior editor and the author of An Epidemic of Absence. moisesvm.com 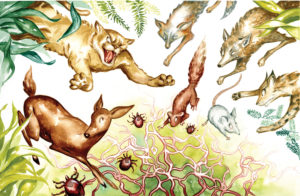 Healing the Body, Mind, and Cultural Divide: It’s More than a Walk in the Park